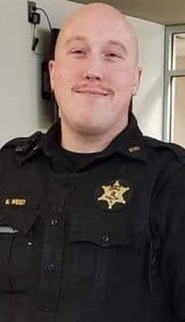 Image from Officer Down Memorial Page

SPRINGFIELD – On Wednesday, State Representative Brad Stephens (R-Rosemont) joined House colleagues in honoring the life of Knox County Deputy Sheriff Nick Weist (End of Watch: April 29th, 2022) and to thank his widow for her and her husband’s ultimate sacrifice for his community and state. Deputy Weist was killed in the line of duty in Henry County after he attempted to set up spike strips on U.S. Route 150 to stop an armed suspect fleeing from officers.

“Sometimes words cannot express the immensity of the greatness of one’s actions and their heroism. This certainly applies to Deputy Nick Weist,” said Rep. Stephens. “Deputy Weist ended his shift and was on his way home the morning he died and heard about the pursuit on his drive home. Instead of going home, he went to help and gave his life in doing so. This demonstrated the selflessness that is so elemental in our law enforcement officers. Our hearts extend from Cook County to Knox County to his wife and family he leaves behind. Let’s never forget these Illinois heroes and their families who do so much to keep us safe.”

House Joint Resolution 93 was introduced by State Representatives Dan Swanson (R-Alpha) and Norine Hammond (R-Macomb) to designate Illinois Route 150 from Galesburg Main Street to the intersection of U.S. Route 150 and Illinois Route 17 the “Deputy Sheriff Nick Weist Memorial Highway.” This route is significant in that it passes the AlWood Elementary School.

Rep. Swanson described the events of Deputy Weist’s death in remarks on the Illinois House of Representatives floor on Wednesday. Deputy Weist’s shift had ended on the morning of April 29th, 2022 and he was heading home to his family. On the drive, he heard that his fellow law enforcement officers were in pursuit of a Galesburg individual heading north on Illinois Route 150. This person had a gun and fired at officers.

Deputy Weist expected the pursuit to continue north and returned to a location near Alpha to set up spike strips instead of going home. In avoiding the strips, the subject veered and struck Deputy Weist. The car stopped and pursuing officers caught the subject running from the scene. Donovan Swartz, a volunteer firefighter who observed the striking, rendered emergency first aid until emergency personnel and additional officers arrived.

Rep. Swanson also highlighted how Deputy Weist may have saved many young children’s lives because of his actions; a mile away at the time of the incident, children attending AlWood Elementary School were crossing Route 150 to get to school. Deputy Weist is survived by his wife, Jessica, and his children, Ava and Emery. He is described in this resolution as having wanted to be a police officer since he was very little. He was sworn into the Aledo Police Department in 2015 and began working as a sheriff’s deputy for Knox County in 2018. Deputy Weist was also a volunteer for the Viola Fire Department.

This resolution is currently in the House Rules Committee and was filed in August 2022.